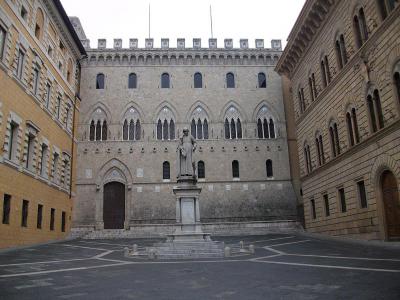 The Palazzo Salimbeni is a 14th century fortress that flanks a piazza of the same name. The original structure was remodeled into neo Gothic style in 1879.

The Palazzo Salimbeni was built on the site of an earlier structure that dated back to 12th century. It was the residence of the Salimbeni family until they were driven out of the city in 1419. The city council then took over the building and sold it in 1866 to the Monte dei Paschi di Siena a major Italian bank. It now serves as the bank’s headquarters.

The Palazzo Salimbeni was at first an imposing medieval fort like structure with a Sienese Gothic architectural style. Giuseppe Partini remodeled it after the takeover by the Monte dei Paschi di Siena Bank and the size of the structure was enlarged. The battlements on the roof of the building and the arches below formed part of the original medieval structure. In 1959, the building was renovated again to modernize the offices of the bank. After the takeover, Monte dei Paschi di Siena have added many works of art to the interior of the building including masterpieces by artists, Beccafumi, Pietro Lorenzetti and Sassetta. The bank holds many valuable documents about the economic history of Siena in its archives.
Image by Tango7174 on Wikimedia under Creative Commons License.
Sight description based on wikipedia