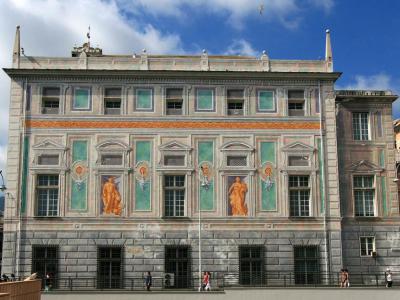 The Palazzo San Giorgio or Palace of St. George (also known as the Palazzo delle Compere di San Giorgio) is a palace in Genoa, Italy. It is situated in Piazza Caricamento. The palace was built in 1260 by Guglielmo Boccanegra, uncle of Simone Boccanegra, the first Doge of Genoa. For the construction of the new palace, materials were used from the demolition of the Venetian Embassy in Constantinople, obtained from Byzantine Emperor Michael VIII as a reward for Genoese aid against the Latin Empire. The palace was intended — through the creation of a civil-political center — to separate and elevate the temporal power of the republic's government from the religious power of the clergy centered on the Cathedral of San Lorenzo. In 1262, Guglielmo Boccanegra was deposed and forced into exile. The palace was used for some time as a prison; Marco Polo was its most famous resident and it was there that he dictated his memoirs to Rustichello of Pisa.
Image by Twice25 & Rinina25 on Wikimedia under Creative Commons License.

This sight is featured in a self-guided walking tour of Genoa, Italy within the mobile app "GPSmyCity: Walks in 1K+ Cities" which can be downloaded from iTunes App Store or Google Play. Please download the app to your mobile phone or tablet for travel directions for visiting this sight. The app turns your mobile device to a personal tour guide and it works offline, so no data plan is needed when traveling abroad.

A Tour of Genoa Religious Edifices