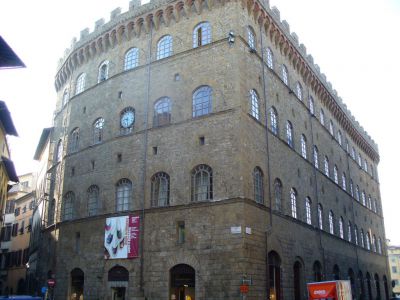 Palazzo Spini Ferroni is the grandest private medieval house-palace in Florence, having been commissioned in 1289 by the rich cloth merchant and banker Geri Spini, on plots that he had bought after the 1288 flood of the Arno, from the monks of Santa Trinita. At the time, it rivaled in size the contemporary Palazzo Vecchio, the seat of government of the Republic, which was being built in the same period.

Built during a turbulent medieval century in the city, noted for internecine conflict between families, the palace is a fortress-like stone block, with street-level arches in a tall first story, with a protruding cornice surmounted by merlons.

In 1846, after a spell as a hotel, the palace was purchased by the comune of Florence and later used for state offices during the period (1865–71) when Florence was capital of Italy. In 1874, it was partly renovated in neo-medieval style; shop-fronts were opened in the ground floor and a tower and an arch facing the river Arno were demolished, giving the palace the present appearance. In the 1930s, it was bought by famous shoe designer Salvatore Ferragamo and since 1995 the Palazzo has housed a museum dedicated to telling Ferragamo's story, which is quite enjoyable for anyone who likes shoes.