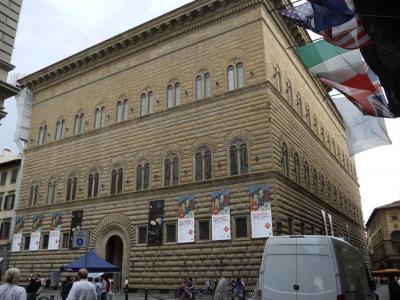 With its rusticated stone inspired by the Palazzo Medici, this palace is another example of civil architecture, albeit with more harmonious proportions. Its construction was begun in 1489 by Benedetto da Maiano, for Filippo Strozzi the Elder, a rival of the Medici who had returned to the city in November 1466 and desired the most magnificent palace to assert his family's continued prominence and, perhaps more importantly, a political statement of his own status. Filippo Strozzi died in 1491, long before the construction's completion in 1538. Duke Cosimo I de' Medici confiscated it in the same year, not returning it to the Strozzi family until 30 years later.

Unlike the Medici Palace, which was sited on a corner lot, and thus has only two sides, the Strozzi – surrounded on all four sides by streets – is a free-standing structure. Given the newly felt desire for internal symmetry, this introduced a new problem in Renaissance architecture – that of integrating the cross-axis. The ground plan of the palace is rigorously symmetrical on its two axes, with clearly differentiated scales of its principal rooms. The radiating voussoirs of the arches increase in length as they rise to the keystone (a detail that was much copied for arched windows set in rustication in the Renaissance revival), while the dominating cornice is typical of Florentine palaces of the time.

The venue is now known for hosting ever-changing contemporary art exhibitions and cultural events – so, as exhibits rotate, be sure to check what's on display to see if it is up your alley. You may as well simply walk in the peaceful (free-admission) courtyard and admire the archways and the layout, but if you do go inside, don't miss the little room off the ticket office that has the wooden model of the palace and storyboards on the walls about the Strozzi family – very interesting. There generally is no line, so no need to plan or make a reservation.

Tip:
As it is one of the few late-opening attractions in Florence, take advantage of this palace to make it one of your stops on your night stroll.