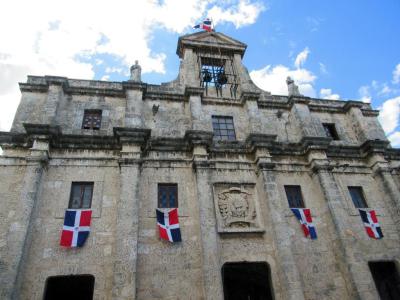 The National Pantheon was built from 1714-1746 by the Spaniard Geronimo Quezada y Garçon and was originally a Jesuit church. The structure was constructed in the neoclassic-renaissance style. Today the structure stands as a national symbol of the Dominican Republic and serves as the final resting place of the Republic's most honored citizens.

Jesuits held mass here from 1746-1767. After 1767 it was used as a tobacco warehouse and then as a theater. The theater was the venue for the pro-independence organization La Trinitaria, which staged shows under aliases such as La Filantrópica and La Dramática. From its stages, the ideas were set in motion for a free and sovereign republic by national heroes like Juan Pablo Duarte, Ramon Matias Mella, and Francisco del Rosario Sanchez, among others.

In 1956, Spanish architect Javier Borroso renovated the structure to serve its new purpose as a national mausoleum, by order of then dictator Rafael Trujillo. Originally, Trujillo envisioned being interred at the National Pantheon, yet ironically today it is the place were the country's most famous persons are honored, among others Trujillo's assassins. Other notables that are buried at the National Pantheon include: Francisco Gregorio Billini, Gregorio Luperón, and Eugenio Hostos.

Opening Hours: Monday – Sunday: 9 am – 4:30 pm
Image by puroticorico on Flickr under Creative Commons License.
Sight description based on wikipedia