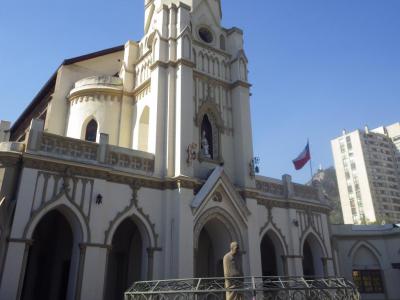 The Parish of Santa Filomena is located in the Patronato district of the Recoleta municipality of Santiago. It emerged as a result of the persecution of non-profit organizations in the wake of “Rerum Novarum” encyclical, issued by Pope Leo XIII on May 15, 1891, which addressed the condition of the working class and their exploitation.

Named after a Christian martyr and saint, the church was originally built in 1884 by Eugenio Joannon, using donations made by some of the wealthiest families of Santiago. The construction was supervised by a priest, Ruperto Marchant.

The beautiful, Neo Gothic edifice forms a remarkable sight, with a grand exterior and interior decorated with several magnificent paintings, some which arrived from France and create a spectacular chiaroscuro effect. It was initially used by the congregation of the Josephite fathers who came to Santiago from Italy.

Despite the damage inflicted on the building by the many earthquakes that have hit Santiago since the 19th century, it still stands. The most destructive earthquake took place in 1985. After all the necessary repair had been done and the church been restored to its original beauty, it was declared a national heritage site in 1995.
Image by amandabhslater on Flickr under Creative Commons License.
Sight description based on wikipedia