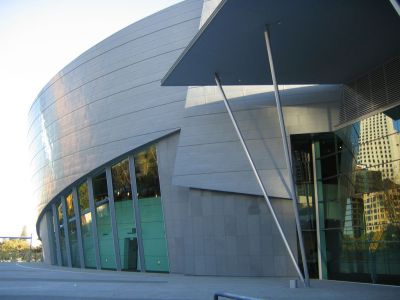 Built by Multiplex and officially opened in August 2004 by the Hon Dr Geoff Gallop, MLA, Premier of Western Australia, its construction was extremely controversial, owing to an overblown budget and an unprepossessing external appearance. It has been described as a "Soviet-era mausoleum" and a "giant grey cockroach", as well as a white elephant whose financial viability has been questionable. However, it made it possible for Perth to host the 2011 Commonwealth Heads of Government Meeting (CHOGM), with heads of state and official delegates of more than 50 member countries.

The building is WA's only purpose-built convention centre and can cater for functions of up to 5000 delegates. The project was aimed at attracting major conventions to Perth, with the State's tourism and hospitality industries in mind. The centre has two public lifts, one travelling from the underground car park, through level one, concluding at level two; the other from level two to level three.
Image by Greg O'Beirne on Wikimedia under Creative Commons License.
Sight description based on wikipedia