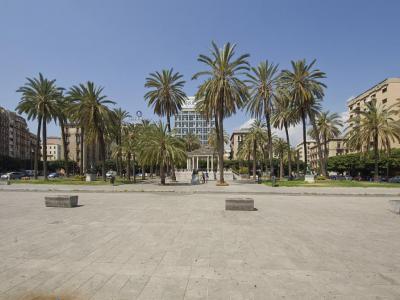 Piazza Castelnuovo is a square of Palermo. Along with the contiguous Piazza Ruggero Settimo, it forms a single urban space, commonly called Piazza Politeama, by virtue of the presence of Teatro Politeama, the second most important theatre of the city after Teatro Massimo. The square is located between Via Ruggero Settimo, Viale della Libertà and Via Dante, near the historic centre of Palermo, and represents one of the most popular city's square.
On Piazza Castelnuovo are located a structure called "Palchetto della Musica" (work of Salvatore Valenti), the monument to Carlo Cottone (work of Giovan Battista Palazzotto and Domenico Costantino), the sculptures "Nautica" (work of Mario Rutelli), "Lavoro" (work of Benedetto Civiletti) and "Senzatetto" (work of Pasquale Civiletti).
Image by Veselina Dzhingarova on Flickr under Creative Commons License.
Sight description based on wikipedia