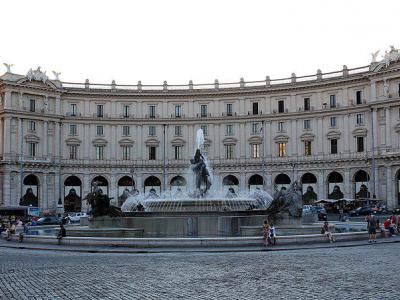 Viminal Hill is the smallest of Rome’s Seven Hills, and on its summit you will find the charming Republic Square. This semi-circular piazza was built over the exedra of the Baths of Diocletian; the porticos around the square were built between 1887-98 by Gaetano Koch, in memory of the ancient buildings that once stood on this site.

Of particular note is the church Santa Maria degli Angeli e dei Martin, built inside the ruined frigidarium of the Roman Baths of Diocletian in the Piazza della Repubblica. Inside this small Basilica, you will find a Meridian Line, commissioned by Pope Clement XI in 1702, built by Francesco Bianchini. Its main use was for checking the accuracy of the Gregorian Calendar and as a tool to predict the exact dates of Easter for the next several centuries (Easter falls on the Sunday after the first full moon of the Spring Equinox).

The sculptural group was created by Mario Rutelli, a Sicilian artist who, incidentally, was also grandfather of Rome's former mayor Francesco Rutelli. The naiads' nudity and languorously provocative poses – totally naked, soaked by the water gushing from a large nozzle at the back, glittering in the sun in very lascivious attitudes – caused a bit of a sensation when first unveiled to the public in 1901.
Image by Michael aus Halle on Wikimedia under Creative Commons License.
Sight description based on wikipedia