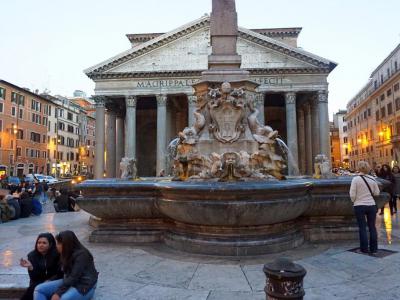 As with so many of Rome's wonderful squares, upon arriving at the Piazza della Rotonda you will find a sea of people enjoying themselves: some sitting almost up against the fountain, some kids running around, tourist families orienting themselves and deciding whether to enter the monolithic ancient Pantheon.

The Pantheon is known the world over and needs no further introduction, but if you are exploring Rome's fountains, you will be content to view the Fontana del Pantheon, appreciate its artistic merits and find the best side from which to view its details.

It was built in 1575, but its current appearance dates to 1711, when Pope Clement XI had it topped with a 20-foot red marble Egyptian obelisk brought to Rome in ancient times. Mounted upon a high pedestal, the obelisk was one of a pair originally constructed for the Temple of Ra in Heliopolis (the other one is still in the Piazza della Minerva, round the back of the Pantheon).

Aside from the ancient obelisk, the Baroque art is playful and unusual. Observe the silly dolphins with teeth, which were a very popular Baroque-style feature of the period. They have cartoonish expressions and seemingly eyebrows, too!
Image by Mariordo (Mario Roberto Durán Ortiz) on Wikimedia under Creative Commons License.