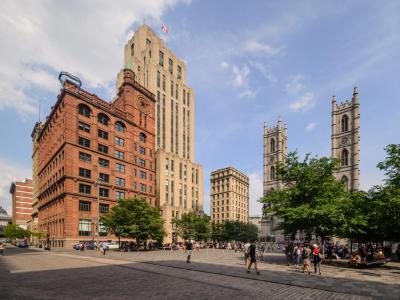 One of the oldest public sites in Montreal, this square has got an epic history dating back to the 1690s when it was first named Place de la Fabrique. As early as 1720, citizens of the Ville-Marie settlement would gather here to watch military maneuvers, following which it became the site of hay and wood markets and, later, of a Victorian garden and tramway hub. The square's real significance, however, comes not so much from the spot itself as from what surrounds it.

Sitting in the heart of historic Montréal, Place d'Armes is bordered on all sides by structures that define the city's diverse heritage. Directly to the right of Notre-Dame Basilica is the U-shaped Séminaire de Saint-Sulpice, Montréal's oldest building, constructed by French Sulpician priests in the 1680s. The building's clock is the oldest of its kind in N America, and the gardens are considered to be among the oldest on the continent.

Erected in 1888, the New York Life building became the city's first skyscraper, a whole eight floors up and furnished with an elevator that was quite a novelty at that time. Across the way, the Royal Trust and the Duluth Building (to the left of the basilica) are two early-20th-century skyscrapers that mark a distinct architectural shift, cemented with the arrival in 1931 of the Art-Deco-style Aldred Building, inspired by New York's Empire State Building (and designed to ensure maximum natural lighting for the streets below). A post-war glass and steel structure, the only example of its kind in the city, now known as the National Bank Tower (NBT), completed the square's architectural timeline in 1968.

Directly in front of the NBT, you'll find two sculptures: a caricature of an haughty Englishman with a pug, and one of a French woman with a poodle. While the dogs eye at each other, just wanting to play, the lady gives an evident look of disdain towards the symbol of English power (that being the old Bank of Montreal), while the gentleman looks down his nose the Notre-Dame Basilica, symbolizing historical French influence in the region.

The pedestrian-friendly square also features a monument depicting the founders of Montréal, including French officer, Paul de Chomedey de Maisonneuve, and is fitted with sprawling benches that provide relief from the surrounding concrete.

Why You Should Visit:
Beautiful place to stop, have a coffee or snack and marvel at the historical, French-inspired architecture and monuments including a memorial to the founders of Montreal. Beautiful views of Notre-Dame to boot!
Image by Arild Vågen on Wikimedia under Creative Commons License.