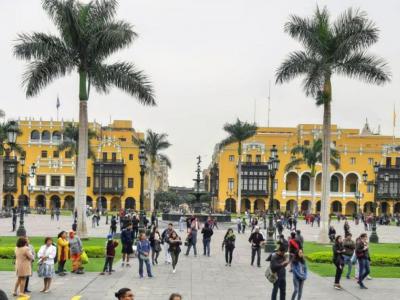 What a better place to start a tour of Lima than the center of the city? Plaza de Armas or Plaza Mayor (“Main Square” in Spanish) is the place where Lima City was born in 1535, founded by Spanish conquistador Francisco Pizarro. It is also the spot from where Jose San Martin announced Peru’s independence from Spain in 1821. Importantly, Plaza de Armas is encircled by many monuments of historic importance, such as the Government Palace, the Municipal Palace, the Archbishop’s Palace, the Palace of Union and the Cathedral of Lima.

A set of four avenues, namely – Jiron Carabajal, Jiron Union, Jiron Junin and Jiron Huallaga – frame the Plaza in a grid-like manner. Interestingly, after the conquest of the Incas, the King of Spain, Charles I, set forth regulations by which the cities should be built, which prescribed that the streets should follow a grid which frames the main square (or plaza) of a city.

In addition to these sights, you can also find several other buildings of historic interest in close vicinity of the Plaza. Among them are Casa del Oidor and the San Francisco Church. Both the Plaza and the surrounding area are breathing with history and are truly exciting to explore.

Why You Should Visit:
To see the history and culture of downtown Lima, inhale the ambiance, and take many pictures.
Terrific for people watching and a perfect place to start a tour of the city's historic areas.

Tip:
Be sure to pack a pair of sunglasses to be able to see the details on the bright yellow buildings.
At noon at the Presidential Palace, there is the Changing of the Guard – really interesting to watch.
Check out a few places before buying expensive souvenirs, as many stores carry the same goods at varying prices. They'll try to sell you at the highest price – negotiate!
Image by Allan Grey on Wikimedia under Creative Commons License.