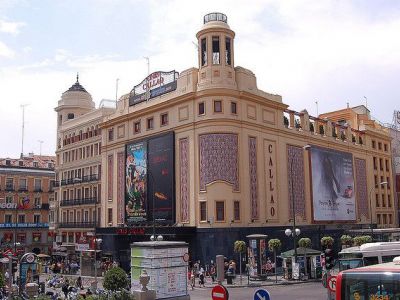 Although it is neither very large nor very important, you won’t miss the Plaza Callao, which is crossed by the Gran Via, especially if you would like to see a film in Spanish, as there are six cinemas in the square. It also boasts buildings that were once the tallest in Spain.

The Palacio de la Pensa was built in 1929 and with its 14 storeys it was the tallest building in Madrid until the Telefonica Building surpassed it. The building houses a cafe, a concert hall and a cinema, as well as offices, private flats and the Madrid headquarters of the Socialist Party.

The Carrion Building was built in 1933 by the architects Eced and Feduchi in an Art Deco style of white marble and granite. It won a second-class medal at the National Exhibition of Fine Arts in 1934. Its cinema is on the ground floor. In 2007 the facade was restored and all the advertising slogans were removed, apart from the one for Schweppes, which is a symbol and has appeared in films and documentaries.

The Callao Cinema Building was built in 1927 by Louis Gutierrez Soto. It is a fine example of Spanish Neo-Baroque with a Viennese Art Deco interior. The terrace is used in fine weather for open-air film screenings. The first “talkie” in Spain was shown here in 1929.

Tip:
Go at night to see the Schweppes sign and the rest of Gran Via in all its neon glory!
For an even better experience, go to the El Corte Ingles department store (located at the square) up to the 9th floor which is the food court, and from there you get great views, especially looking towards Gran Via.
Image by ciukes on Flickr under Creative Commons License.
Sight description based on wikipedia