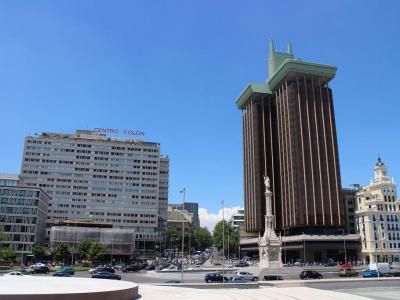 Plaza de Colon is a bit of a paradox in a sense that, although it is situated not far from busy intersections, this place is actually where many a people come to relax. The lovely square is indeed well worth spending a while walking in Jardines del Descubrimiento (Discovery Gardens), or sitting on a bench in the sun watching the kids flock around with their skateboards and mountain bikes.

Originally named after St James, the square was renamed in 1893 in honor of Christopher Columbus, whose monument now stands in the center. Constructed by Jeronimo Sumol, it represents a 17-meter column made of white Italian marble topped by the famous explorer's figure with one arm outstretched, as if in the direction of distant lands waiting to be explored. The base of the monument is Neo-Gothic and stands in a stone fountain with a huge cascade, at each end of which is a flight of stairs leading to the Centro Cultural de la Villa de Madrid. The sound of the cascade is incredibly loud, so talking in a normal voice, while next to it, is impossible.

Another monument of note is by Joaquin Vaquero-Turcios. This huge block of concrete, bearing the inscriptions of sayings by various philosophers and Spanish leaders, resembles a fish tail or an anchor, depending on the angle you look at it.

Why You Should Visit:
There is a mix of contrasting architecture all around, with both modern and old buildings to be found; if you're a keen photographer, don't forget your camera as you might want to take some really incredible shots here.

Tip:
Check out the huge Spanish flag, the world's biggest (worth €400.000) and one of the most eye-catching features of this square.
Beside the plaza, you will find Platea (Calle Goya, 5-7), a new gastronomic site with some 20 outlets serving tapas and lots of other delicacies.