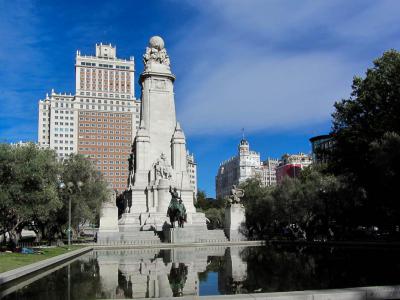 Plaza de Espana is a large square and a popular tourist spot in the heart of Madrid, located at the western end of the Gran Via. The square is a short walk north from the Palacio Real (Royal Palace) and is bordered by two of Madrid's most prominent skyscrapers, Torre de Madrid (Madrid Tower), built in 1957, and Edificio España (Spain Building), built in 1953.

In the center of the plaza stands a monument to Spanish novelist, poet and playwright Miguel de Cervantes Saavedra, designed by architects Rafael Martinez Zapatero and Pedro Muguruza and sculptor Lorenzo Coullaut Valera. Most of the monument was built between 1925 and 1930. The tower portion of the monument includes the stone sculpture of Cervantes, which overlooks the bronze statues of Don Quixote and Sancho Panza. Next to the tower are the stone images of Don Quixote's two "true loves", a peasant woman, named Aldonza Lorenzo, and the beautiful, imaginary Dulcinea del Toboso.

Why You Should Visit:
A typical tourist destination with nice sculptures, beautiful fountain and plenty of seats to sit, rest and watch the sunset/world go by.
There are plenty of food vendors around and the surrounding streets are teeming with cafes, bars and restaurants.
Image by Jocelyn Kinghorn on Flickr under Creative Commons License.
Sight description based on wikipedia