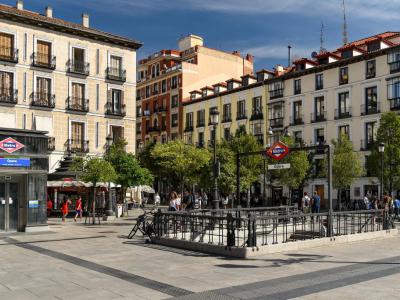 At the end of Calle del Arenal you will find Plaza de Isabel II, a large square sided by the Teatro Real. It is a popular meeting place for the young of Madrid. Apart from the illustrious buildings around it, the square is rather unremarkable with the statue of Queen Isabel II in the middle of a fountain at its center. The queen succeeded her father King Fernando VII to the throne when she was only three years old. This in itself wasn’t so extraordinary, as child-monarchs weren’t unusual; what was extraordinary is that the king’s successor was female. Part of the 6th century Salic Law stated that no woman could accede to a throne, but Fernando VII didn’t much like his brother Carlos, his natural successor, so he overruled the law and decreed that his daughter should reign after him. Obviously, he didn’t count on dying when she was only three and for eight years Isabel’s mother acted as a regent. The queen’s life wasn’t particularly a happy one – at the age of 11 her mother abandoned her, she got married at 16 to her homosexual double-first cousin, and had only five of her eleven children reach adulthood. Her uncle Carlos fought her for years over the succession of the Spanish Crown and she was disposed during the Glorious Revolution in 1868. Her son Alfonso became King Alfonso XII and Isabel was exiled to France, where she died in 1904.
Image by losmininos on Wikimedia under Creative Commons License.
Sight description based on wikipedia