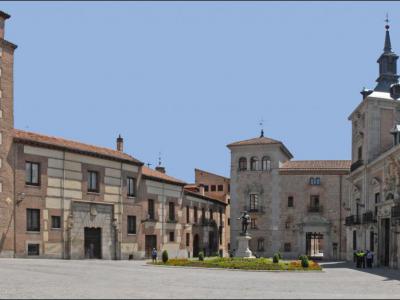 If you fancy a bit of quiet in the heart of busy Madrid, the best place to go is Plaza de la Villa, not far from Plaza Major. This small, medieval square is surrounded by lovely buildings, each with its own story. Among them is Casa Villa (Madrid’s old Town Hall), built in 1696 and renowned for its graceful stained glass windows and frescoes by Antonio Palomino. Remarkably, at some point, this building was used as a prison. Adjoining the town hall by an archway is Casa de Cisneros, an early Spanish Renaissance castle built in 1537. It boasts a Plateresque facade, quite rare in Madrid, and an outstanding collection of fine tapestries.

The nearby Casa and Torre de Los Lujanes are supposedly the oldest buildings in the city; the tower dates back as far as the early 15th century. According to a legend, King Charles I imprisoned here King Francis I of France after the battle of Pavia in 1525. The reason for that was the French king's refusal to show respect and bow head to his captor. Therefore, King Charles ordered that the tower door be lowered, so as to force Francis to bow head each time he entered and exited the building. That gave people an impression that the French monarch, indeed, was bowing to their king.

In the center of the square stands a statue of Alvaro de Bazen, the Spanish admiral who planned the Armada and, remarkably, never lost a battle in his entire 50-year-long career. The statue was sculpted in 1888 by Benlliure and was set in the plaza in 1980.

Why You Should Visit:
Not big a plaza with nothing very touristy about it; it is rather discrete and feels like stepping back in time, which is very cool.
The buildings are quaint and well maintained; the garden in the center is nice and well kept.

Tip:
Come at night when it is beautifully illuminated for an even better shot.
Image by Malouette on Wikimedia under Creative Commons License.