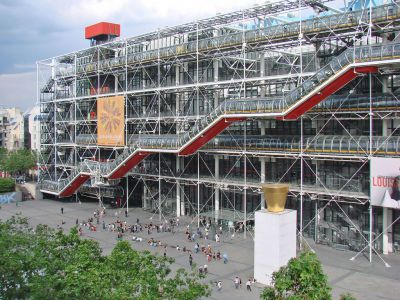 Almost half a century after its completion, the Pompidou Centre in Paris still continues to impress onlookers with its uncompromising aesthetics. Equally praised and criticized for its resemblance to an oil refinery or steel plant, this building leaves no one indifferent and is remarkably fresh in its appearance. Apart from the aesthetics, as an institution the Pompidou Centre has proven overwhelmingly successful, largely exceeding expectations in terms of both staffing and attendance.

Just as the name suggests, the center owes its existence to France's modernist-minded president Georges Pompidou who envisioned a “major museum for contemporary art in all its forms”. In the more traditional terms, that meant accommodating collections of the French National Museum of Modern Art, the largest of its kind in Europe.

The venue is beautifully designed, spacious, and on top of that, treats visitors to some truly marvelous views of Paris. Instead of being a marble-clad palace of culture, it appears more like a “supermarket” of artistry, in which the building acts merely as a container, indifferent to what goes on within, and fit to adapt to various uses. Creating such a building, the architects Renzo Piano and Richard Rogers sought to produce a neutral setting for all sorts of cultural happenings. Just like a supermarket, it is open to all and neutral in its approach to the consumers (audience) and the actual “goods on display” (artworks) alike.

This peculiar approach seems to have worked well so far, given the number of exhibitions, both permanent and rotating, held at the center, featuring a broad range works by both acclaimed and emerging artists, spanning from modernity to contemporary art and including some truly weird productions.

Tip:
Like many French art museums, the bookstore and shop are excellent, so check them out. The top floor restaurant is incredible as well; rather expensive but worth it for a treat.
In particular, those keen on Constantin Brancusi, can get up close with his works featured at his replica studio recreated just outside the building (which is also part of the complex). The Brancusi atelier is free to enter from 2pm to 6pm each day except Tuesday.