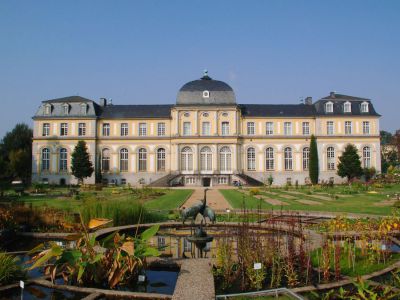 Poppelsdorf Palace (German: Poppelsdorfer Schloss) is a Baroque palace style in the district Poppelsdorf of Bonn, western Germany. It was constructed from 1715 till 1746, under design by the Frenchman Robert de Cotte. The palace was owned by the Archbishop of Cologne Clemens August. Under the Prussian rule, in 1818 the Palace and the nearby Park became part of the University of Bonn. In the same year the Park was converted to the Botanical Garden of Bonn, which today contains about 0.5 hectares of greenhouse area with eleven greenhouses and about 8.000 different plants. In 1944 the Palace was heavily damaged by an Allied air attack. It has been rebuilt in a much more simple appearance from 1955 on.
Image by Curnen on Flickr under Creative Commons License.
Sight description based on wikipedia