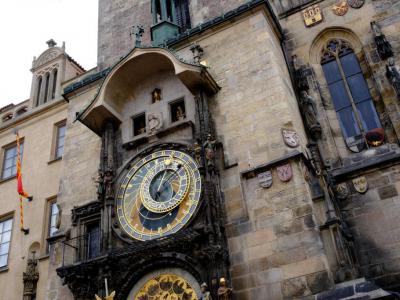 The Prague Astronomical Clock was built in around 1410 and is one of the oldest clocks of this type in Europe and the only one still working.

It is set in the Old Town Hall and is certainly worth seeing as it shows the large degree of scientific knowledge of the era. The clock face represents the Earth and the sky; one part for the day and the other for the night. The clock’s outer ring shows old Czech time; the astronomical dial shows the movements of the Sun and the Moon, and a third dial is for zodiacal signs.

The clock itself is actually quite difficult to understand, but its greatest attraction for most tourists is the hourly show of statues of the Twelve Apostles who appear one after the other. On each side of the clock are statuettes representing Vanity, Greed and Hedonism. A fourth statuette, Death represented as a skeleton, strikes the hour.

There are, of course, various legends about the clock, one being that the clockmaker, Hanus, had his eyes pulled out after finishing his work to stop him from making another. To take revenge, he is said to have broken the clock which then took 100 years repairing. Another legend says that if the clock stops for any length of time, Prague will fall.

Tip:
Climb or take the elevator to the top of the tower that houses the clock to get the perfect bird's eye view of the city from all angles.
Image by www.david baxendale.com on Flickr under Creative Commons License.
Sight description based on wikipedia