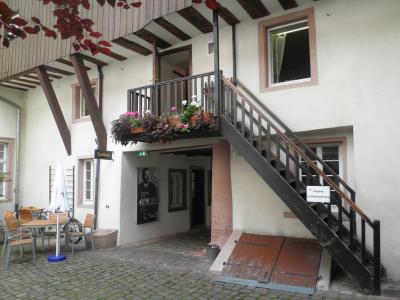 President Friedrich Ebert Memorial is devoted to the life and work of Friedrich Ebert, born in Heidelberg on February 4, 1871. From humble origins, he became a member of Germany’s Social Democratic Party. A small exhibition was first opened in his birthplace in 1960. In the 1980s the memorial was expanded, including a library and record office containing documents written by Ebert and some personal belongings. In 2007 the exhibition underwent a general refurbishment program. The library now offers more than 7000 books, magazines and brochures concerning the history of the labor movement in Germany and Friedrich Ebert’s time in general. Currently, this attraction is visited by about 50,000 people each year.

Operation hours:
April to October: Tuesday to Friday: 9am to 6pm, Saturday and Sunday: 10am to 6pm;

November to March: Tuesday to Friday: 9am to 5pm, Saturday and Sunday: 10am to 5pm
Image by Letov on Wikimedia under Creative Commons License.
Sight description based on wikipedia

Want to visit this sight? Check out these Self-Guided Walking Tours in Heidelberg. Alternatively, you can download the mobile app "GPSmyCity: Walks in 1K+ Cities" from iTunes App Store or Google Play. The app turns your mobile device to a personal tour guide and it works offline, so no data plan is needed when traveling abroad.

Germany has a rich history regarding religion, religious buildings and great architecture. Many significant Baroque innovations were born in Germany and this guide will lead you to some of its pearls of religious architecture. Heidelberg's houses of worship are a wonderful example of rare beauty.