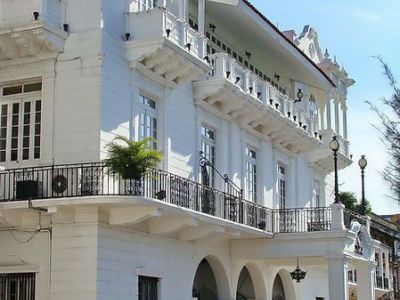 If you are keen on visiting an awesomely beautiful palace, you should definitely think of the Palacio de las Garzas in Panama City. This official presidential residence was originally constructed by the Spanish in the 17th century and is a spectacular example of Spanish colonial architecture. Initially and for a fair amount of time, this pristine white building, decorated in true Moorish style, was used as a customs house.

You can see the spacious inner courtyard along with the airy lobby designed in a way to emulate Andalusian style. Ornately decorated fountains adorn the courtyard. However, it is not the white color or the décor that earn the building its sobriquet, but the white African herons that are found strolling freely in the palace. The herons were brought here after the completion of the final renovations that were carried out under the then president, Belisario Porras. Rumors have it that during the visit of the US president Richard Nixon in 1977, the palace was sprayed with disinfectant that caused the death of all herons there. The latter were said to be replaced overnight. The palace lies in the center of the tourist ‘must visit’ area. Though an entry to the palace is restricted, you can easily liaise with a friendly guard and take a quick peek and maybe click a few snaps too.
Image by Melpanama on Wikimedia under Creative Commons License.