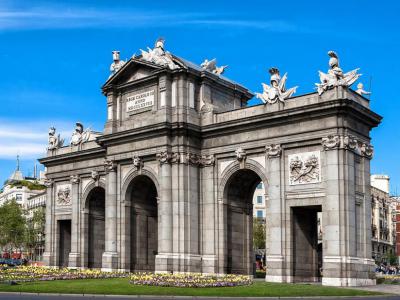 Puerta de Alcala (The Alcala Gate) is a Neo-classical monument in Plaza de la Independencia in Madrid. It stands just several meters away from the main entrance to Parque del Buen Retiro. The square is bisected by Alcala street, although the street itself doesn't cross through the monument which gives start to the streets of Alfonso XII, Serrano and Olozaga. The name “Alcala” originates from the old path that once existed from Madrid to the nearby town of Alcala de Henares.

Back in the late 19th century, Madrid was still somewhat a drab villa in appearance, surrounded by medieval walls. Around the year 1774, King Charles III commissioned Francesco Sabatini to construct a monumental gate in the city wall, through which an expanded road to the city of Alcala was to pass, replacing an older, smaller gate which stood nearby. The new gate was inaugurated in 1778.

Why You Should Visit:
To see what is considered to be the first modern post-Roman triumphal arch built in Europe – even older than the Arc de Triomphe in Paris and the Brandenburg Gate in Berlin.
Image by Emilio García on Wikimedia under Creative Commons License.
Sight description based on wikipedia