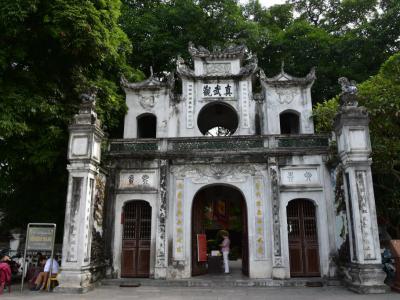 Located on the shore of the Truc Bach lake in Hanoi is the Quan Thanh Pagoda, an 11th century Taoist temple dedicated to Tran Vu, a principal Taoist deity. The temple was built during the reign of King Li Thai To, between 1010 and 1028. Since then, the structure has undergone several renovations. The last restoration of the temple was in 1893.

Tran Vu was one of the four deities that protected Hanoi in each direction. The role of Tran Vu was to protect the north of the city. According to legend the deity helped King An Duong Vuong chase away demons during the construction of the Co Loa citadel. From the principal gate visitors can see the three door entrance of the temple with a bell tower and the figure of a tiger that is said to guard the pagoda. A large bronze statue of Tran Vu by master sculptor, Old Trong sits majestically within the shrine. A statue of Old Trong carved in his honor by grateful students is also found in the temple.

The Quan Thanh pagoda is a major tourist attraction in Hanoi. Locals visit the temple on the Lunar New Year and on the 1st and 15th of the Lunar month to pray for health, luck and happiness. Traditional martial arts classes are held near the temple.
Image by Ondřej Žváček on Wikimedia under Creative Commons License.