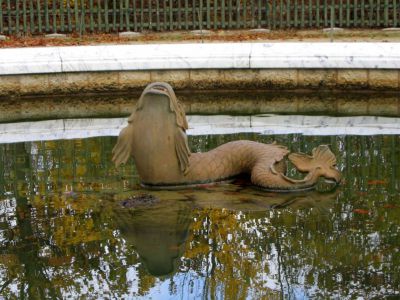 A “quinconce” is a quincunx and, for those of us who were never top of the class in Latin, it is a geometric pattern, elaborated by Pythagoras, consisting of four objects arranged in a square or a rectangle with a 5th object in the centre (like the five dots on a playing dice or domino).

During a replanting program in 1775 both bosquets were destroyed and lime trees were planted in their place. It was at this time they were named the Quinconce du Nord (the Bosquet du Dauphin) and Midi (the Bosquet de la Girandole).

After the Great Storm of 1999, when a large part of Versailles was devastated by the wind, an extensive reforestation program was launched and during this the lime trees were cut down and the two bosquets were restored to their original state and reclaimed their original names.
Image by Thesupermat on Wikimedia under Creative Commons License.