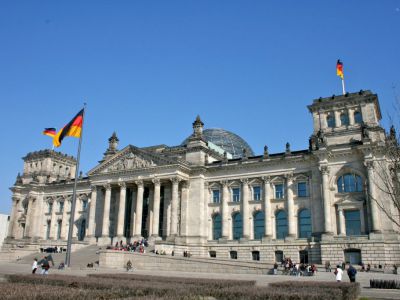 The historic Reichstag building is the seat of the German parliament (Bundestag) in Berlin, and has been in place since 1894. In 1933, the building was severely damaged by fire, allegedly set by Dutch communist Marinus van der Lubbe, and after World War II fell into disuse as the parliament of the newly-emerged German Democratic Republic met in the Palace of the Republic in East Berlin, while the parliament of the Federal Republic of Germany met in the Bundeshaus in Bonn. To mark the reunification of Germany in 1990, the Reichstag hosted a ceremony, on October 3, attended by Chancellor Helmut Kohl, President Richard von Weizsäcker, former Chancellor Willy Brandt and many other dignitaries. A day later, in an act of symbolism, the legislature of unified Germany assembled here for the first time.

One of the Reichstag's most distinctive features is the large glass dome, topping the building. Walking around this glass "egg" and ramping it up and down is an extraordinary experience. Apart from the breathtaking 360-degree panorama of the surrounding Berlin-scape, it also provides view of the working parliament down below. Another cool thing is that you can book a restaurant at the top of the Reichstag for lunch, which is a fabulous way to end your visit here with a nice, multi-course with wine. Well worth doing and highly recommended, if you can swing it!

Why You Should Visit:
Free attraction providing some pretty unique views across Berlin.
The lift takes you up to the top floor where you can freely wander around the dome and take photos.

Tip:
Don't forget to book in advance at the information desk or via the website, and have a valid ID (passport) for entry. The place is free to enter, but because of tight security, waiting queues can be long, especially in summer.
To avoid standing in line, reserve a table in the Käfer Roofgarden at the very top (note: the Käfer is in the pricey category).
Also, don't forget to wrap up, as all the glass "windows" are actually open and it may get pretty chilly up there.