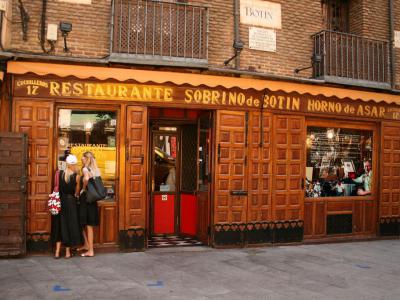 Madrid's most famous eatery, the Botin restaurant is reportedly the oldest continuously operating restaurant in the world, having been founded by Frenchman Jean Botin and his spouse in 1725 as Casa Botin. The restaurant was eventually inherited by their nephew, which explains the change of name to Sobrino de Botin ("Botin's Nephew") it is now known by.

The famous painter Francisco Goya is said to have worked here in his younger years as a dishwasher, and the place was also a firm favorite of Ernest Hemingway. The restaurant grew particularly popular after Hemingway's regular visits here, where, they say, he even set the last scene of his novel "The Sun Also Rises". Other than these historical associations, Botin is known primarily for its ambience, comfort, photo ops, and main specialty – the 'cochinillo' (roast suckling pig).

Tip:
You can optionally book the 'Botin Experience' which includes a tour of the restaurant prior to sitting down for your meal.