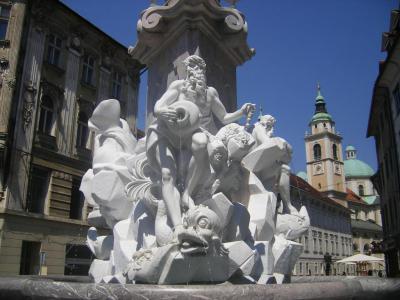 Officially known as the Fountain of the Three Rivers of Carniola, the Robba fountain was originally located outside the Ljubljana Town Hall, near St. Nicholas Cathedral. In 2006, it was renovated and moved into the National Gallery, while its exact copy took the place of the original in Town Square. The fountain was built between 1743 and 1751 by Italian sculptor Francesco Robba, inspired by Bernini's Fountain of the Four Rivers on Piazza Navona in Rome. The Ljubljana fountain represents the three rivers of Carniola, namely Ljubljanica, Sava, and Krka, and has an obelisk in the middle. Leading to the fountain are steps symbolizing the Carniolan mountains.