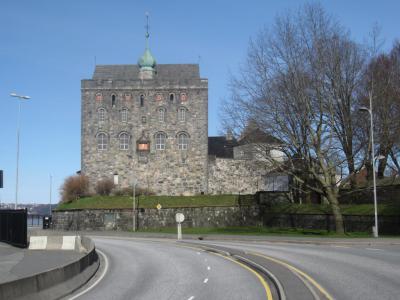 The Rosenkrantz Tower is one of the most prominent buildings of Bergenhus Fortress. The tower takes its name from governor Erik Rosenkrantz. It was during his reign (1559–1568) that the tower received its present shape and structure. The oldest part of the building, however, is made up of a medieval tower, known as the "Keep by the Sea", built by King Magnus the Lawmender in the 1270s as part of the royal castle in Bergen. The keep was slightly modified around 1520, then extensively modified and expanded in the 1560s by Scottish stonemasons and architects in the service of Erik Rosenkrantz to attain its present form. Rosenkrantz's building contained dungeons on the ground floor, residential rooms for the governor higher up, and positions for cannons on the top floor.
Image by Tor-Egil Farestveit on Wikimedia under Creative Commons License.
Sight description based on wikipedia

This sight is featured in a self-guided walking tour of Bergen, Norway within the mobile app "GPSmyCity: Walks in 1K+ Cities" which can be downloaded from iTunes App Store or Google Play. Please download the app to your mobile phone or tablet for travel directions for visiting this sight. The app turns your mobile device to a personal tour guide and it works offline, so no data plan is needed when traveling abroad.