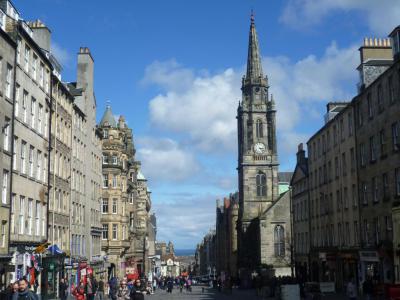 The Royal Mile is a chain of streets which form the main access through the Old Town from Edinburgh Castle to Holyrood Abbey. It is longer than an ordinary mile because at the time it was used by royalty going from the castle to the abbey, the Scottish mile was longer than the English one.

The Mile is full of shops, restaurants, pubs, monuments, museums and other buildings of interest, so it’s not surprising that it is the busiest tourist street in the Old Town. In the order that the streets run from the castle to the abbey, they are: Castle Esplanade, initially a parade ground and where the annual Military Tattoo takes place. Note the cannonball, fired by mistake from the castle, lodged in the wall of Cannonball House.

Castlehill is the home of The Hub building, which was once the Tolbooth Highland St John’s Church. Along this street, you will also find Camera Obscura and World of Illusions, the oldest tourist attraction in the city. Castlehill is followed by Lawnmarket which was once a linen market. You will see a new hotel here whose controversial design was won it the “Carbuncle Award” since 2009.

The next section of the Mile, the High Street is the main focal point for the Edinburgh Festival and is full of street entertainers and musicians. It is in this part of the Mile where the Heart of Midlothian is to be found. After the High Street comes Canongate, with the beautiful Moray House and the former Canongate Tolbooth, now the People’s Story Museum.

Finally, you will reach Abbey Strand approaching the ruins of Holyrood Abbey. Next to the Queen’s Gallery, the remains of the Holyrood Palace gatehouse can be seen and the coat of arms of King James IV of Scotland are set into the wall.
Image by Herbert Frank on Flickr under Creative Commons License.