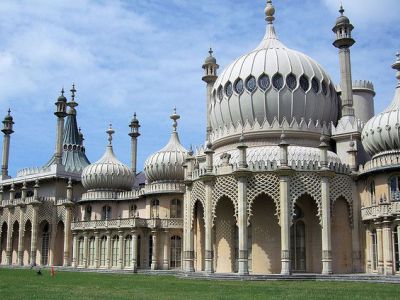 The Royal Pavilion is a former royal residence located in Brighton. It was built in three campaigns, beginning in 1787, as a seaside retreat for George, Prince of Wales, from 1811 Prince Regent. It is often referred to as the Brighton Pavilion. It is built in the Indo-Saracenic style prevalent in India for most of the 19th century, with the most extravagant chinoiserie interiors ever executed in the British Isles. The palace looks rather striking in the middle of Brighton, having a very Indian appearance on the outside. However, the fanciful interior design, primarily by Frederick Crace and the little-known decorative painter Robert Jones, is heavily influenced by both Chinese and Indian fashion (with Mughal and Islamic architectural elements). It is a prime example of the exoticism that was an alternative to more classicizing the mainstream taste in the Regency style.
Image by Jim Linwood on Flickr under Creative Commons License.
Sight description based on wikipedia