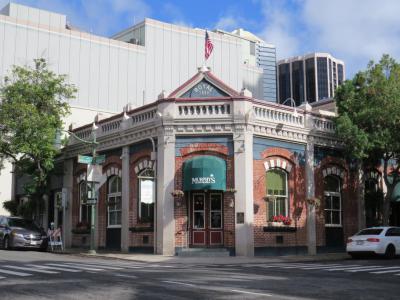 The Royal Saloon was created with a mixture of Florentine Gothic and Renaissance Revival Styles, by Walter C. Peacock. Peacock was a barkeeper and investor, who wanted to create his own business, the Royal Tavern. After Merchant Street was widened in 1889, he took over this bar and another one to serve as a tavern. During Prohibition, the Royal Tavern became a furniture store. During its lifetime, it was also known as the Royal Hawaiian Tavern, Jameson's Tavern, and is now Murphy's Bar and Grill. After the Royal Taven, Walter C. Peacock went on to manage the Moana Hotel in Waikiki.

It took until 1862 for the Hawaiian Government to permit the sale of alcohol, though the island had seen several unsanctioned sales before that. The site of the future Royal Tavern was home to a rudimentary bar for visiting sailors as early as 1873. This bar was one of many- during peak times of year, hundreds of ships would stop at Hawaii, which meant that there could be up to 4,000 sailors looking for a tavern on any given day. There were so many bars in the area, Lower Nuuanu Avenue was affectionately nicknamed “Fid Street,” after sailors' slang for alcohol.
Image by Joel Bradshaw on Wikimedia under Creative Commons License.