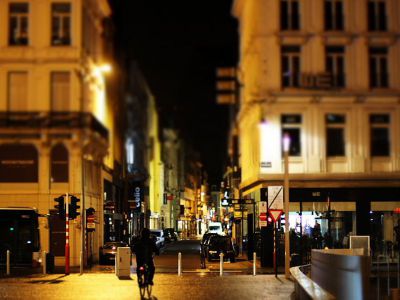 Rue Neuve, otherwise known as Nieuwstraat in Dutch (English: New Street), is a pedestrian street in central Brussels, the #2 shopping destination of all Belgium after Meir in Antwerp. The street runs between Place de la Monnaie in the south and Place Charles Rogier in the north. It is also often referred to as Rue Notre-Dame/Onze-Lieve-Vrouwstraat, after the Church of Our Lady of Finistere, which now stands in the middle of the busy retail district. The latter has been there since the late 19th century, and became a luxury shopping venue in the early 20th. In 1975 it was pedestrianized. Rue Neuve has the second highest rent price in Belgium, €1,600/square meter/year, yet still being criticized as architecturally "boring", "uniformly 'mass market’" and lacking in independent retailers. To mend the situation, the city of Brussels now plans to bring more residents into the area and thus make it more "attractive."
Image by MouseLord on Wikimedia under Creative Commons License.
Sight description based on wikipedia