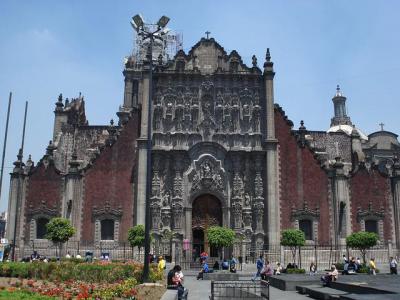 Attached to the larger Metropolitan Cathedral flanking Mexico City's Zocalo, you will find the Sagrario, considered a masterpiece of Churrigueresque Baroque architecture in Latin America. Built in the 18th century to keep the archives and vestments of the archbishop, it has been declared a UNESCO landmark and is impressive in its own way.

With geometric designs in the form of pilasters, the altarpiece pattern in the facade has a unique resemblance to the main altarpiece inside the church, which in turn, resembles the Altar of the Kings inside the neighboring cathedral. The high altar has twelve stained glass windows in the neoclassical architectural style, but is not made of wood or gold like those in other churches – instead, it uses white stone in the shape of a Greek cross, surrounded by walls of 'tenzontle' (a reddish porous volcanic rock) which may be the church's most distinguishing feature.

The Sagrario Metropolitan stands on a drained lake and its foundations are slowly sinking because of the instability of the soil beneath. Efforts are underway to stabilize the building and other nearby structures.