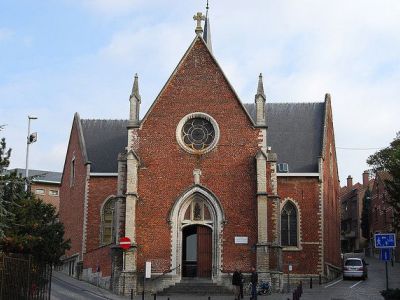 Situated within the city, this beautiful little building is one of the many churches constructed over the years near the five major parishes of the city. The first constructions began in the 17th Century, and a complete overhaul of the structure was carried out in the early 20th Century, forming the beautiful church that we see today. It is popular for being the place where resides Father Damien’s tomb, a well known clergy figure from the city. Tourists from all over the world come to honour his memory.
Image by Wouter Horré on Flickr under Creative Commons License.

Want to visit this sight? Check out these Self-Guided Walking Tours in Leuven. Alternatively, you can download the mobile app "GPSmyCity: Walks in 1K+ Cities" from iTunes App Store or Google Play. The app turns your mobile device to a personal tour guide and it works offline, so no data plan is needed when traveling abroad.