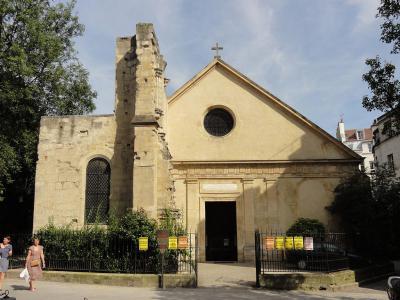 Located less than 200 meters from Notre-Dame, Saint-Julien-le-Pauvre (French for "Saint Julian the Poor"), is a Melkite Greek Catholic parish church in Paris billed as the oldest church in Paris. Standing on the site of a refuge for pilgrims, whose origins went back at least as far as the 6th century, it was re-built in stages from the 12th to the 19th centuries and granted to the Melkite community in 1889.

Its original design, inspired by the Notre-Dame Cathedral, was modified several times, and the resulting church is significantly smaller in size than originally planned. The church's piers are based on those of Notre-Dame, and its capitals, all carved into foliage bar, form an impressive ensemble. At the ambulatory's centre is a curious, twisted column from which spring no less than 14 vault ribs; a similar profusion of ribs characterizes the remainder of its vaulting and forms a delirious shower of stone that has earned the ensemble comparisons with parasols and palm groves.

Décor-wise, Saint-Séverin is chiefly interesting for its stained glass, much of which is 15th century, and for the painted Last Judgement adorning the first chapel on the northern side.

The church gardens are well maintained and you will find the oldest tree growing in Paris. Also, a small fountain/sculpture dedicated to children.

Tip:
The church offers musical evenings. The quality of the performance is excellent and the price is quite reasonable (check their website for schedules).