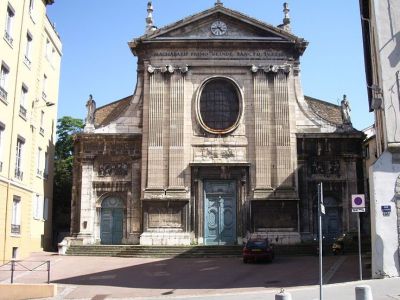 Saint Just is the reconstruction of one of the oldest churches in Lyon and is a rather lovely church standing in a small square, created by two building put up on either side of it in the 19th century.

The original Basilica of Saint Just was built at about 200 meters from today’s church. The basilica was built over a Roman mausoleum in the 1st century AD. Over the centuries it was rebuilt three times: the first church had three naves; a transept and galleries were added to it in the 10th century and in the 13th century the church was rebuilt once more in the Romanesque style with an imposing bell tower and several chapels.

The basilica was destroyed in the War of Religion in the 16th century and work began almost immediately on the new church. Mass was celebrated there on Christmas Eve in 1565, but then work slowed down. The Sanctuary was dedicated in 1591 and the rest of the building was finished in 1663.

Today’s facade was built in the 18th century by Delamonce in the Neo-Classical style. The stalls and the pulpit were installed at the same time. On the walls you will see portraits of the bishops who had been interred in the ancient basilica.

There is a good collection of paintings by French artists, including “Annunciation” by de Vermont and “Nativity” by Taraval. The stained glass windows, depicting scenes from the life of Saint Just and early Christian Lyon, were installed in the 18th century.

The site of the original basilica was the object of several archaeological digs over the years and is now open to the public as an archaeological garden.
Image by Bluebear2 on Wikimedia under Creative Commons License.
Sight description based on wikipedia