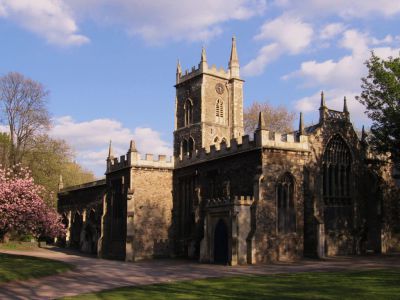 The church began as a small priory around AD 900. It was later rebuilt by Robert, 1st Earl of Gloucester, who also built the nearby priory of St James'. All that remains of the original church is the font, although parts the chancel and tower date from at least the 13th Century. The building was extended during the Middle Ages to include the present-day nave, the pillars of which are actually Victorian additions. Since 1963, Pip 'n' Jay has become one of the leading Evangelical churches in Bristol. In the 1970s it was part of the Charismatic revival in the Church of England. Its vicar was Rev. Canon Malcolm Widdecombe from 1974 until his retirement in 2009. His son, Rev Roger Widdecombe, is an Anglican priest.
Image by William Avery on Wikimedia under Creative Commons License.
Sight description based on wikipedia