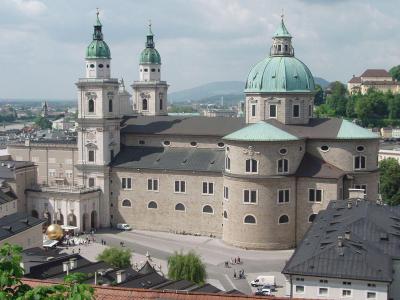 The Salzburg Cathedral is the most significant church in Salzburg. It is a magnificent Baroque structure built in the 17th century.

The site of the Salzburg cathedral once had a Celtic settlement and a portion of the ruins of the Roman City of Juvavum. The first cathedral was built by St. Virgil and improvements were made by St. Rupert between 767 and 774. It served as a place of worship for over 60 years before it was burned in a lighting storm in 842. Archbishop Wolf Dietrich von Raitenhau decided to build a new cathedral in 1612 but the project was delayed by the conflicts with Bavaria. His successor, Prince- Archbishop Markus Sittikus commissioned the architect, Santino Solari to design and build the present Baroque church in 1614. The cathedral was consecrated in 1628. In 1944, a World War II bomb damaged the building and it was restored to its former glory in 1959.

Excavations under the present cathedral have unearthed mosaics and artifacts from the Roman city of Juvavum. Notable features in the present structure are a 14th-century gothic baptismal font from the earlier cathedral where Mozart was baptized, a majestic main organ with sculptures of angels playing instruments and statues of St. Rupert and St. Virgil. The cathedral also has magnificent portals created by the sculptors, Schneider-Manzel, Matare and Manzu.

Why You Should Visit:
Absolutely massive, incredibly ornate, free (although they ask for a donation), and very welcoming towards all kinds of people including tourists.

Tip:
Take a downward trip to the crypt – there is as much underground as above.
Worth attending a Sunday mass at 10am, as you get a full orchestra and chorus.