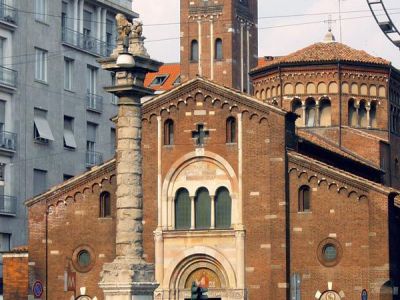 San Babila is a church once considered the third most important in Milan, the other two being Duomo and the Basilica di Sant’Ambrogio. It is located on the Piazza San Babila in the centre of Milan.

A church was built in the 4th century at the site of a Roman temple. The nature and the origins of this structure are unclear. The church was reconstructed in the 9th century and was further prolonged with the addition of a frontal section and a new Baroque façade in the 16th century.

The whole church was renovated in the 19th century with the aim of restoring the Medieval Basilica. The old bell tower which was destroyed in the 16th century was replaced with the new one. Further renovations in the 19th and 20th centuries resulted in the creation of today’s Neo-Romanesque design. An image of the Madonna which is highly respected by the Milanese, is found in the right aisle of the church. The big fountain in the middle of Piazza San Babila is donated to the town by Fier Milano, the Milan Exhibitions authority, in 1997.

Piazza San Babila was renowned as a famous meeting point for the wealthy Milanese. Still the presence of a few theaters reminds us of those days but the real people who used to come here now hardly show into such crowded surroundings.

The church dedicated to Saint Babila was restored at the beginning of the 20th century, an example of "rebuild-it-as-it-might-have-looked" approach. It is one of the most outstanding churches in Milan which carries the characteristics of the architectural style from this period.
Image by Pino alpino on Wikimedia under Creative Commons License.
Sight description based on wikipedia