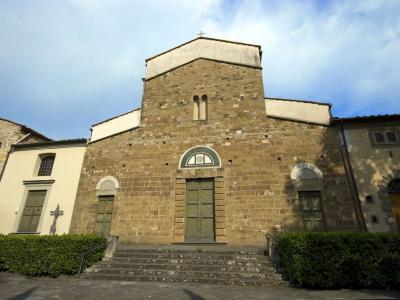 The Roman Catholic Chiesa di San Felice (Church of St Felix) is located on the south bank of the River Arno, just west of the Pitti Palace. Built about the 10th century outside one of the gates of Florence's early walls, it is predominantly Gothic in style, but has a Renaissance façade by Michelozzo, added in 1457.

From the outside San Felice looks pretty ordinary, but once inside you are glad you made the right decision. The interior had a Madonna with Child and Saints by Ridolfo Ghirlandaio. Another chapel has a fresco by Giovanni da San Giovanni, depicting San Felice reviving St Massimo; the angels gathering the grapes in the painting are by Baldassare Franceschini. It had a triptych (1467) by Neri di Bicci, depicting St Augustin and St John Baptist, and St Julian and King St Sigismond. Another chapel had a Madonna and Child with St Hyacinth, by Jacopo da Empoli. The church has a Last Supper by Matteo Rosselli and over the high altar is a large Crucifix attributed to Giotto or his school.