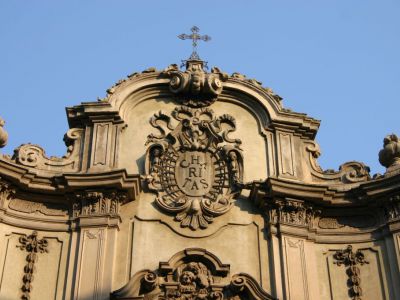 San Francesco di Paola is a church that lies in the heart of the richest and the most grandiose part of Milan. It was named after Paola who was the patron Saint of the Church.

In 1623, a huge fire destroyed the oratory of Sant’Anastasia. A new church known as church of San Francesco di Paola was constructed by the architect Marco Bianchi on these ruins. Construction work started in 1728 and it was opened for the devotees in 1735. A well known architect Alemagna concluded the church in 1891 and refined the facade as well. San Francesco di Paola is one of the best examples of baroque and rococo style in Milan.

Nowadays, all that is left of the original is a structure with a single nave. The external facade is characterized by alternating concave and convex surfaces embellished with repeatedly placed coats of arms and the word “Charitas”. The interior of the church is richly decorated in marble and gilt in typical baroque and rococo style. A large main altar, constructed by Giuseppe Buzzi between 1749 and 1753, having a neoclassic fresco representing “The glory of San Francesco di Paola”, stands in the centre.

In 1839, a new plan for the facade of the church was proposed by the architect Carlo Amati. This design was in a neoclassic style and it became an object of discussion. This design was then rejected due to criticism by Carlo Cattaneo who mentioned the clear differences between the style proposed and the style of the existing church.

The church displays a divine sense of irony. Its attractive baroque facade has concave and convex forms. Inside is a painting in the vault by Carlo Maria Giudici showing the glory of San Francesco di Paola. It is one of the best churches of the city of Milan and rightly deserves your time.
Image by Giovanni Dall'Orto on Wikimedia under Creative Commons License.