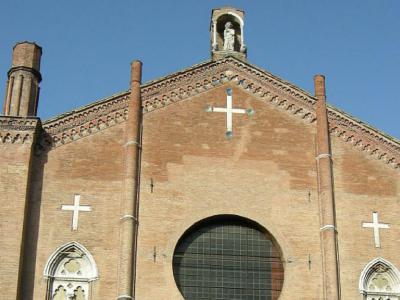 San Giacomo Maggiore is a church in Bologna founded by the Augustinian Order in 1267. It houses, among the rest, the Bentivoglio Chapel, featuring numerous Renaissance artworks. A community of hermits had established itself near the walls of Bologna, along the Savena river, as early as 1247. Here they founded a monastery with the annexed church of St. James. They were later merged with the Augustinian Order in 1256 and, as they needed a larger religious complex within the walls, in 1267 construction of the new church in the present location. The edifice was finished in 1315, but it consecration took place in 1344 after the completion of the apse section.

The façade is the oldest part of the church, with its late-Romanesque proportions. The decorations in Istrian stone on the ogival windows, in Venetian style, were added by Lombardy masters in 1295. The four funerary cells were added in the early 14th century, a few time after those in the portico, which date to the 13th century and had frescoes; the original entrance protyrus was modified in the same period.
Image Courtesy of Wikimedia and sailko.
Sight description based on Wikipedia.