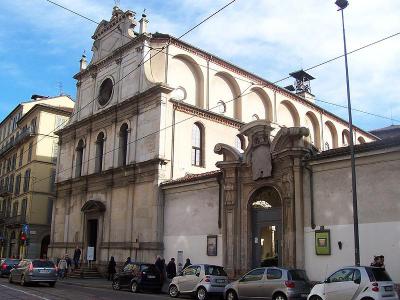 San Maurizio al Monastero Maggiore is an old church that dates back to 1503. The church is often called "Sistine Chapel of Milan" due to its stunningly beautiful interior paintings. Literally, everywhere you look is covered with artwork.

The church was originally attached to the most important female convent of the Benedictines in the city, Monastero Maggiore, which is now in use as the Civic Archaeological Museum. The church today is used every Sunday from October to June to celebrate in the Byzantine Rite, in Greek according to the Italo-Albanian tradition. It is also used as concert hall.

The complex was founded in Lombard times, partially re-using ancient Roman edifices. Of these there remain a polygonal tower, a relic of the ancient Maximian walls, and a square one, originally part of the lost Hippodrome and later adopted as the church's bell tower. The monastery is now home to Milan's Archaeological Museum.

The construction began in 1503 under design of Gian Giacomo Dolcebuono in collaboration with Giovanni Antonio Amadeo. The edifice was finished fifteen years later by Cristoforo Solari, divided into two parts: one for the faithful, one for the nuns. Until 1794 the latter were strongly forbidden to cross the dividing wall.

The most important artwork of the church is the cycle of frescoes from the 16th century covering the walls. The dividing wall has frescoes depicting the Life of San Maurizio by Bernardino Luini which flank an altarpiece with an Adoration of the Magi by Antonio Campi. The chapels in the faithful's area are by Aurelio Luini, son of Bernardino, and his brothers. The counterfaçade has a fresco by Simone Peterzano (1573). In the right side Bernardino Luini also frescoed the Chapel of St. Catherine of Alexandria (1530). Frescos are also influed by Forlivese school of art (Melozzo da Forlì and Marco Palmezzano).

If you love religious art, San Maurizio al Monastero Maggiore is a must-see on your Milan itinerary.
Image by MarkusMark on Wikimedia under Creative Commons License.
Sight description based on wikipedia