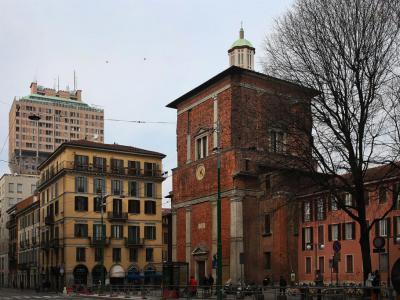 St. Nazaro Church is one of the oldest and magnificent churches in Milan. Originally founded in the 4th Century and built by St Ambrose, this basilica was dedicated to the Apostles to whom it owes its other name: Basilica Apostolorum. It dates back to the year 382 and has preserved some relics from the apostles. This famous monument is situated on one of the radial roads which lead from the city centre towards the outskirts. In 1075, a fire broke out and destroyed the church. In 1571, the demolished building was reconstructed as per the desire of Carlo Borromeo. During the next few centuries, the church underwent many structural changes and was then again restored. The current basilica is the work of Enrico Villa which lasted from 1946 to 1963. Many remnants of archaeology and works of art including inscriptions from the 5th Century to Renaissance and Neoclassical period can be seen here.

In Constantinople, a distinct feature of the Church of the Holy Apostles, was the presence of the church’s plan on the Greek cross with apses on the arms. San Nazaro has been built following this feature. Relics of the Apostles were housed under the altar. A new apse was created in 397 after the discovery of the body of the St. Nazarus. Marbles and other items of decoration for the shrine and the church were donated by Serena, niece of emperor Theodosius I. The interior has been intentionally made simple according to the wishes of the designers and owners and not due to lack of funding.

The roof of the church was originally in timber beams, and in the Middle Ages it was replaced by vaulted roof. During the same period, the dome above the crossing was also added. The octagonal-plan chapel finishes in a dome whose sides rise from the square base.

St. Nazaro Church is an important example of Palaeo Christian art in Milan. Fascinating for the artworks preserved inside and for its history, this church is well worth visiting.
Image by Giovanni Dall'Orto on Wikimedia under Creative Commons License.
Sight description based on wikipedia