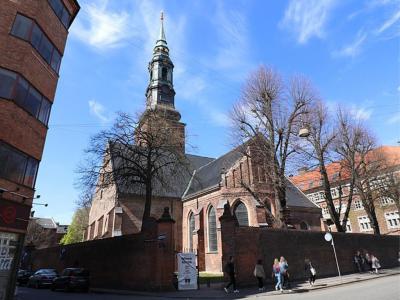 Serving the German speaking community in Copenhagen, St. Peter’s Church is a mid-15th century single nave church. At this Parish church, you will find an intricate complex of Sepulchral chapels. The church holds the distinction of being central Copenhagen’s oldest.

During the middle ages, there were four Catholic Parish churches in Copenhagen and St. Peter’s Church was one of them. It is believed to have been established in the 12th century. Burnt down in 1380, the church was again rebuilt shortly. It was used as a bell foundry and canon for a brief while after the Reformation.

It was in 1585 that St. Peter’s Church was presented to the German speaking population of the city by Frederick II. Hans van Steenwinckel the Elder renovated the building adding a gablet upper floor to the tower. A spire replaced this floor in the 17th century. The church went on to become an important spot and a meeting point for the city’s economic, political, military and cultural elite.

The historical fire of 1728 damaged this church to a great extent. Though the outer walls remained intact, the interior was lost completely to the flames. It was rebuilt shortly after by Johan Cornelius Krieger.

Danish Palaces and Properties Agency maintains this church today and it continues to attract tourists from across the world.
Image by Matthias Schalk on Wikimedia under Creative Commons License.