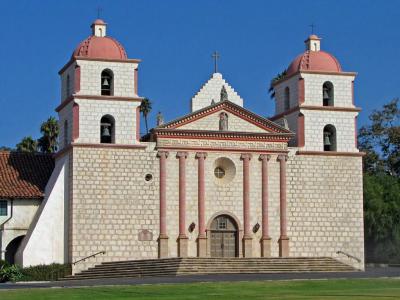 Mission Santa Barbara, also known as Santa Barbara Mission, is a Spanish Franciscan mission near present day Santa Barbara, California. It was founded December 4, 1786, the feast day of Saint Barbara, for the religious conversion of the indigenous local Chumash—Barbareño tribe of Native American people. The Mission grounds occupy a rise between the Pacific Ocean and the Santa Ynez Mountains, and were consecrated by Father Fermín Lasuén, who had taken over the presidency of the California mission chain upon the death of Father Presidénte Junípero Serra. Mission Santa Barbara is the only mission to remain under the leadership of the Franciscan Friars since the day of its founding.
Image by Carleton E. Watkins on Wikimedia under Creative Commons License.
Sight description based on wikipedia

This sight is featured in a self-guided walking tour of Santa Barbara, California within the mobile app "GPSmyCity: Walks in 1K+ Cities" which can be downloaded from iTunes App Store or Google Play. Please download the app to your mobile phone or tablet for travel directions for visiting this sight. The app turns your mobile device to a personal tour guide and it works offline, so no data plan is needed when traveling abroad.