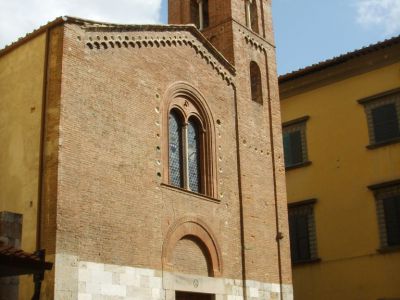 The bell tower was also repaired and rebuilt after the war. It was completed in 1236 and consists of a granite stele with narrow mullioned windows and a pyramid-like roof. Above the door inside is the family crest of Agostini della Seta, who was a patron and benefactor of the church. You will also be able to admire the “Martyrdom of Saint Cecilia”, painted in 1607 by Ventura Salimbeni.
Image by Sailko on Wikimedia under Creative Commons License.