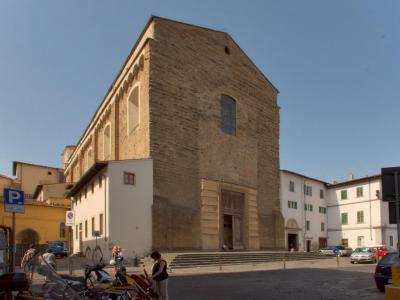 The Santa Maria del Carmine church serves as a shrine to Our Lady of Mount Carmel, the name given to the Blessed Virgin Mary. Built in the late 13th century, what one can see today on the exteriors is just the remains of the Romanesque- Gothic structure. In the 18th century, a fire nearly destroyed the entire structure and miraculously spared the Brancacci Chapel- the Renaissance Fresco, the church is most renowned for.

The Brancacci Chapel stands as a monument of the immergence of the Italian Renaissance. The fresco that adorns the wall of the Santa Maria del Carmine is among the most influential and an important turning point in the history of Italian Art. The making of the fresco in the Brancacci Chapel began in 1425, when Masolino da Panicale was commissioned to work on three walls of the chapel. Masolino called upon his associate, the 21 year old Masaccio to assist him throughout the project. His brief visit to Hungary left Masaccio in charge of the fresco, which led to a major influence of his style on the fresco which is seen as one of the best works of his life. However, Masaccio’s demise in 1428 left the fresco abandoned for 60 years till the arrival of Filippino Lippi, who also contributed immensely to the Chapel.

Corsini Chapel also makes part of the Santa Maria del Carmine church. The Corsini, probably the richest family in Florence during the 17th–18th centuries, had this chapel built in 1675, to hold the remains of St. Andrew Corsini (1301–1374), a member of the family who became a Carmelite friar and the Bishop of Fiesole, canonized in 1629. The architect Pier Francesco Silvani choose for it the Baroque style then popular in Rome. The small dome was frescoed by Luca Giordano in 1682. The elaborated Italian Rococo ceiling is from one of the most important 18th century artists in the city, Giovanni Domenico Ferretti.
Image by giovanni sighele on Wikimedia under Creative Commons License.