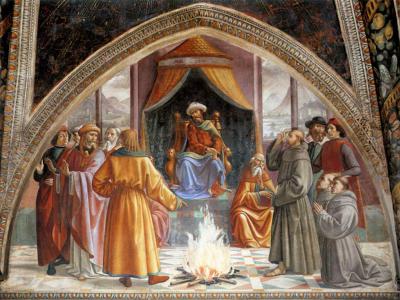 Santa Trinita ("Holy Trinity") is a church in central Florence. It is the mother church of the Vallumbrosan Order of monks, founded in 1092 by a Florentine nobleman. Nearby is the Ponte Santa Trinita over the river Arno. The church is famous for its Sassetti Chapel, containing notable frescoes by Domenico Ghirlandaio that are among the masterworks of 15th-century painting. The current church was constructed over 11th century churches in 1258–1280. Multiple reconstructions occurred thereafter. The Mannerist façade (1593–1594) was designed by Bernardo Buontalenti. The relief over the central door of the Trinity was sculpted by Pietro Bernini and Giovanni Battista Caccini. The 17th-century wooden doors were carved to recall saints of the Vallumbrosan order. The Column of Justice in the Piazza outside originates from the Baths of Caracalla and was a gift to Cosimo I de' Medici by Pope Pius IV. It was used in 1565 to commemorate the Battle of Montemurlo.

Why You Should Visit:
In the heart of the city, at the crossroads of the most elegant streets, surrounded by marvelous period buildings like Palazzo Spini Feroni.
The church itself is extremely rich in artworks, most of which are displayed within its chapels. The frescoes and painting by Ghirlandaio are the main draws.